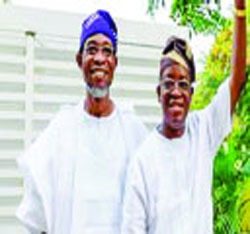 Osun State Governor Gboyega Oyetola’s Chief Press Secretary Ismail Omipidan highlights the achievements of his boss, who has been building on the feats of his predecessor, Ogbeni Rauf Aregbesola.

Until recently, in the entire Southwest, only Lagos State has been lucky to have had persons from the same political family govern the state consecutively and consistently since 1999. This perhaps may have been responsible for the steady socioeconomic and socio-political growth and development of the state.

By November last year, Ogbeni Rauf Aregbesola, immediate past Governor of Osun State and current Interior Minister, made history in the Southwest as the third political leader after the late sage, Obafemi Awolowo and National Leader of the ruling All Progressives Congress (APC), Asiwaju Bola Ahmed Tinubu, to hand over to a successor from the same political party and political family.

After eight years of Aregbesola in the state, another progressive, Adegboyega Oyetola, mounted the saddle. It is the first in the state. But, the governor is already working to ensure that it is sustained.

Since his assumption of office about nine months ago, the administration has demonstrated that it is one that could be trusted by the people at home and in the Diaspora, as it has begun fulfilling the promises made to the people, despite the initial litigation distraction that lasted about eight months.

In a message to mark the state’s 28th anniversary, the governor said “We promised to pay full salary to all our workers, we have not defaulted. We promised to pay our pensioners; we have also not defaulted. We promised to rebuild, remodel and, in some cases, carry out total rehabilitation of existing school buildings in series 4 classrooms, 5 classrooms, 6 classrooms, 8 classrooms, 10, 15 and 20 classrooms at a maximum of 50 pupils/students per class, to cater for communities at 200, 250, 300, 400, 500, 750 pupils per school, we have commissioned completed projects in that regard in Telemu and Morinu,  in Olaoluwa and Iwo local government areas respectively. Our work as a government so far points to one fact: better days ahead.

“We have also reconstructed and equipped 11 fire service stations, with 14 fire fighting vehicles to give confidence to the fire fighters in the discharge of their life and property saving duties. We are doing all these because security is meaningless without safety,” the governor said.

He also said that work has reached advanced stages on the massive revitalisation of hospital facilities in Ejigbo and Ifetedo in Osun West and Osun East senatorial districts respectively, adding that the administration had on assumption of office commenced work on the revitalisation of nine General Hospitals and 332 Primary Health Centres (PHCs) – one per ward – across the state. At the last count, he noted, about 100 PHCs have been completed.

Already, plans have been concluded to begin the inauguration of the completed 100PHCs this Friday.

By last Saturday, at a banquet held in honour of the governor and his predecessor, Ogbeni Rauf Aregbesola, the governor reiterated  the administration’s commitment to stimulating the economy of the state and bring about development that will make it difficult for opposition parties to contest future elections.

According to the immediate past Commissioner of Finance and chairman of the Planning Committee, Bola Oyebamiji, the occasion was to celebrate Oyetola’s triumph at the Supreme Court and to celebrate the appointment of the immediate past governor, Aregbesola by President Muhammadu Buhari as the Minister of Interior, Federal Republic of Nigeria.

The governor said the government was resolute to sustaining the continuity of good governance, the foundation of which the progressives had laid in the state through the implementation of people-oriented policies and programmes that will make life abundant, worthwhile and meaningful for the citizenry.

He added that the resources of the state will also be channelled to things that will impact positively on the lives of the residents, and as well help to set the state on the path of socioeconomic, infrastructure and political growth and development.

While eulogising the former governor for leaving behind good legacies that can never be faulted anywhere in the world, the governor said he was happy to have succeeded Aregbesola.

Oyetola who reflected on the circumstances, hurdles and challenges that confronted him before ascending the office described his emergence at the poll and victory at the court as divine.

He expressed gratitude to the people of the state for their continued support, love and enthusiasm for the government, and for being supportive of his cause especially during the trying periods.

“I am extremely elated to be honoured today alongside my predecessor who is now the Minister of Interior, Ogbeni Rauf Aregbesola. This is another great thing in the history of our state.

“My emergence at the poll and our subsequent victory at the court was a clear manifestation that truly God’s will always come to fruition.

“It is God that sent us to govern the state and I thank God that we have been following the path He laid for us as reflected in the wonderful things that He had allowed us to do and to be doing in the last nine months of our administration.

“I am happy that I was part of the last administration and I am equally happy to have worked with my immediate predecessor, Ogbeni Rauf Aregbesola who God used to create modern Osun.

“Our focus is to continue to do things that will make the confidence that our people have in us permanent and which will help to retain progressives in government because we believe strongly that one way to ensure the masses are one’s side is to continue to prioritise their welfare.

“This is what we have been doing since we came on board and we will remain focused and determined to replicate the legacy of continuity being experienced in Lagos, such that oppositions will find it difficult to contest future elections against us in Osun”, Oyetola said.

Earlier in his remarks, Aregbesola commended President Muhammadu Buhari for the courage in appointing him in spite of the opposition to his candidature from some quarters.

He described the Celebratory Banquet reception as “motivating and encouraging,” saying it is also a challenge for him and the governor to do more.

Aregbesola added: “I just want to thank God for all He has been doing in our lives. I was here July 6, the day after the Supreme Court’s victory of my successor where I said I would be glad if God can allow us to have a state wide celebration for his victory not knowing that I will become a Minister and it will be a double celebration for us.

“Though it was difficult for us to return to government, as the road to where we are today was rough and thorny, we thank God that in spite of all the challenges, we came out victorious.

“I am thankful to God that in the entire South West, after late Obafemi Awolowo and Asiwaju Bola Ahmed Tinubu, I am the next that God favoured to have been able to successfully hand over power to a successor from the same party. This is a rare feat.”

The Chairman of the All Progressives Congress (APC), Prince Gboyega Famodun, described Aregbesola and Oyetola as blessings to Osun and her people.

He described the Celebratory Banquet as deserving for the two prominent citizens of the state. He lauded them for making the party and the state proud.

On their part, the Owa Obokun of Ijesaland, Oba Gabriel Adekunle Aromolaran and Ataoja of Osogbo, Oba Jimoh Olanipekun, also lauded Oyetola for building and sustaining the good legacies of the immediate past administration.

The duo expressed satisfaction on the spate of development that the state had witnessed in the last nine months of Oyetola’s administration.

Oba Aromolaran described as “worthwhile”, the consolidation approach of the present administration, which according to him had ensured the continuity of good governance and meaningful development.

He described the emergence of Governor Oyetola at the poll and his subsequent victory at the Supreme Court as divine, saying God installed Oyetola to consolidate on the good legacies of the immediate past administration.

While commending the good works that Aregbesola did in the eight years of his administration, the revered monarch said that his joy was in the fact that the incumbent government is following the same path of good governance.

The traditional ruler implored Oyetola not to relent in his efforts at taking the state to greater heights.

He assured him of the support of the royal fathers, saying “we are solidly behind you and your predecessor.”

On his part, the Ataoja of Osogbo, Oba Jimoh Olanipekun, lauded the achievements of the progressive government in the last eight and half years in the state.

He commended the state government for aggressively developing the state capital, saying the people of Osogbo will continue to appreciate the good works done to turn around the socioeconomic fortunes of the town.

He said: “Progressive government has brought unparalleled development to Osogbo and other major towns in Osun. Aregbesola did a lot. Oyetola has taken the rest up.

“I thank God for giving us Aregbesola and Oyetola. They are political geniuses and epitome of development. I can say without equivocation that the present administration has successfully taken it up from where Aregbesola stopped.

“We can see the good works going on in all sectors particularly in the areas of security; health and infrastructure, among others. I must also commend the governor for the prompt payment of salaries since assumption of office.”

Similarly, the leader of Afenifere socio-political group, Senator Ayorinde Fasanmi, acknowledged the leadership trait exhibited by the governor in administering the affairs of the state.

Senator Fasanmi, who described Oyetola as a transformer, hailed the governor for being passionate and aggressive towards advancing the economy of the state.