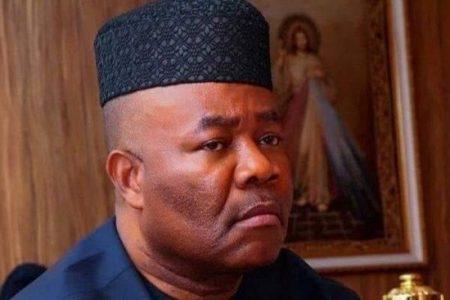 He attributed his face-off with the federal lawmakers to mischief-makers, explaining that the visit was primarily to seek a harmonious working relationship between his ministry and the Legislature.

Akpabio first met with the Acting Clerk to the National Assembly, Amos Olatunde-Ojo, before another round of closed-door talks with the Chairman, House Committee on NDDC, Olubunmi Tunji-Ojo, and  Spokesman for the House, Benjamin Kalu. The second meeting was ongoing as of the time of filing this report.

After the meeting with Olatunde-Ojo, reporters demanded to know from him if he submitted more names of the NDDC contractors or clarified the earlier list he sent to the House.

Akpabio said: “No no no, you are wrong. That was not what the  Speaker demanded. The Speaker wanted to know whether there was undue influence from any section of the National Assembly in respect of contracts in the NDDC.

”He did not say whether they were contractors so I’m hearing it from you.”

The minister explained that his visit was to congratulate Olatunde-Ojo on his ‘elevation’  and in furtherance of President Muhammadu Buhari’s call for a cordial relationship between the Executive and the Legislature.

His words: “I am here(National Assembly) to congratulate the acting CNA for his elevation and of course to solicit the continuous cooperation of the National Assembly towards the development of the Niger Delta region.

”In any case, I am a senator, so seeing me in the National Assembly should not be a surprise; as a former Minority Leader of the Senate and a  senator, I believe I am a senator for life.

”Nobody will refer to me as Governor Akpabio, they will always refer to me as Senator Akpabio so this is homecoming for me. The National Assembly is supposed to resume today(yesterday) but it had been postponed.  I had intended that as soon as the resumption takes place, I will be here as part of my effort to support the President’s decision that there must be a much more cordial relationship between the Executive and the Legislature.

”So far, I believe that whatever disagreement that could have occurred between my own ministry and the National Assembly must have been as a result of mischief and that mischief must be put to rest so that we can work in one accord for the sake of the nation.

”It is important as a minister to make efforts to work towards ensuring that cooperation come on board for the benefit of the region.