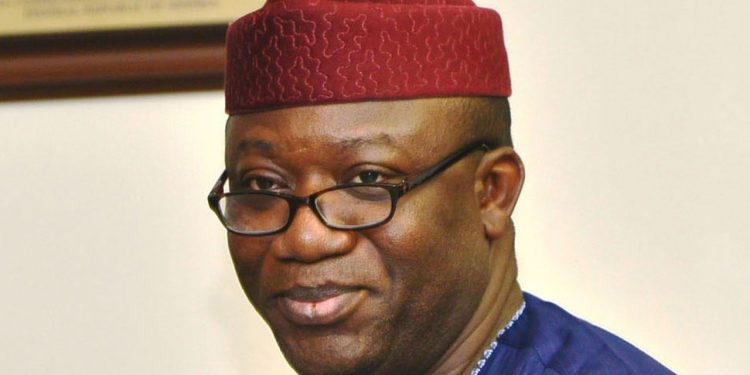 Ekiti State Governor Kayode Fayemi is clearing the Augean stable in the state.

He is laying off of 2,000 workers recruited by former Governor Ayo Fayose between August and September last year, one month after his exit from office. Fayose government was in haste to effect the recruitment. But, the proper documentation into the payroll was not effected. They had not even been paid.

Fayose was known for all sorts of drama. Staging drama at the expense of the people was a pastime.

Months after he became governor  for the second time in 2014, he promised to employ workers. Applicants were asked to submit their CVs and over 10,000 indigenes paid the prescribed N1,000 fee for the form.

However, till he left office in September, 2018 nothing was heard about that script.

It is on record that the governor actually employed about 200 menial workers after he came into office. They were mostly between GL 01 and 04.

But, as with everything with the former governor, there was a drama to it. Those who were employed were not formally inducted into the state’s pay roll and the gist everywhere is that they were being paid under the table, whatever that meant.

That is on record as the only employment that the governor did until about three months to his exit from office when he announced plans to employ about 2,000 workers into the state’s labour force.

The promise was made just before the governorship election and given the story of the 10,000 applicants, few believed the story. It was seen as just another election promise by the outgoing governor aimed at luring the people of the state for political objectives.

Another reason why people doubted him was the fact that just before the election the Fayose administration was owing workers up to seven months in salaries. How a governor owing that much would go the hog of adding to the labour force was seen as untenable.

Former Minister of State for Works Prince Dayo Adeyeye while querying the rationale for Fayose’s election promise in a statement said:

“Few weeks after his inauguration as the state governor, he instructed the unemployed youths in the state to submit their curriculum vitae for jobs that he promised to create for them.

“Over ten thousand youths in the state paid the sum of one thousand naira each, to collect the forms for the jobs, but unfortunately, up till now, he has not employed one single youth in the state,” he said.

“I wonder how a state governor, who has not paid the state workers for over seven months, owing pensioners months of gratuity and local government workers as well, is going to fund the employment of two thousand fresh employees.

“Here is somebody, who sacked all that were employed by the Dr Kayode Fayemi administration that now wants to employ 2000 workers.

“Workers and the youths should know that he is only deceiving them and does not have their interest at heart. The people cannot be deceived because an average Ekiti worker is more educated and enlightened than he is,” he said.

Even the Labour Party (LP) candidate, Dr. Sikiru Lawal, who should have been inclined towards such a populist idea, was not deceived as he flayed Fayose for trying to take the people for granted through the promise.

The election did not turn out for the former governor as he expected. He thought his deputy, Prof. Olusola Eleka, would emerge as his successor.  Fayemi was elected.

However, the former governor took the drama to another level. Few weeks to his exit in September, he commenced the recruitment of 2,000 staff into the state’s employment.

In August 2018 when Fayemi was declared as governor-elect, the Fayose administration recruited 2,000 workers.

Fayose through his media aide, Lere Olayinka, defended the recruitment as a fulfilment of the governor’s promise.

“It is on record that Governor Fayose announced in January this year that recruitment will be made into the state public service and this was followed up with distribution of employment forms in May,” Mr Olayinka  said.

“This was consequent upon the existing vacancies in the public service, especially the teaching sector. There are schools without adequate teachers in critical subjects like Mathematics, Physics, English and others. So the students that are resuming in September should wait till Fayemi assumes office?

“Most importantly, Fayose will carry out all the functions of his office till October 16 and since there is need to employ workers, the government will do so through a transparent process.”

However, that was inspite of the fact that the Fayose government was at that time owing about seven months of salaries.

The arrears of salary left behind by the Fayose government was besides the total debt profile of over N155.79 billion Governor Fayemi has reported that the former governor left behind.