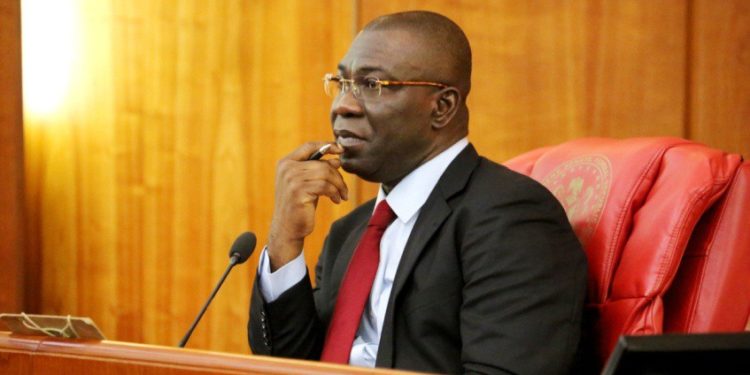 The people of Enugu West Senatorial Zone have rejected the decision by the Deputy Senate President, Ike Ekweremadu, not to return to the senate in 2023.

They said that they have the final say on whether their representative will return to the Senate in 2023 or not.

Ekweremadu had last weekend during his birthday in Enugu declared that he would not be contesting for the Senate again, having been re-elected for the fifth time.

But, the in a statement, his constituents said, “in truth, His Excellency, Sen. Ike Ekweremadu is a man of history whose destiny is intertwined with the yearning and aspirations of his people. In real term, we, his people have the final say on where he goes to on our behalf in 2023.”

They pointed that Ekweremadu has a right to his opinions, “but we, his people, have the final word, as always, in his political decisions, now and in the future.

“Senator Ike Ekweremadu, Ph.D, CFR, Deputy Senate President during his 57th birthday celebration recently in Enugu State to the effect that he will not be seeking re-election into the Senate come 2023.

“While our respect and admiration for the Distinguished Senator remains unshaken, we are minded to state that Senator Ike Ekweremadu is a product of our collective mandate and to that extent answerable to his constituents in all matters relating to his services to our people; including his decisions concerning his political future in 2023.

“As a people, we reserve the right to determine where Sen. Ike Ekweremadu’s services are most suitable for the overall interest of our people. At the appropriate time, we will decide if we are best served by his continued stay in the Senate or otherwise.

“We are certain that in his meteoric rise to prominence in Nigeria and the world at large, he has had little or no control in determining his choice of service to his people. For instance, it was members of his age grade in Mpu that collectively decided to entrust him with the chairmanship of the age grade at a time he least expected it at the tender age of 10.

“His becoming the Chief of Staff to former Governor Chimaroke Nnamani and later the Secretary to the Enugu State Government was also a fortuitous interplay of forces involving the former governor and other major stakeholders in Enugu State at that time who wanted him to serve in such capacities.

“We also make bold to state that his emergence as the Deputy Senate President for a record third term was not of his own volition but by the collective approval of his colleagues in the Senate who saw in him an uncommon trait and capacity to serve in that position.

“In essence, Sen. Ike Ekweremadu’s political trajectory could be likened to the wind, which you can hear but cannot tell where it comes from or where it is going. In the same vein, no one can actually explain how Ike Ekweremadu got to where he is today; but one thing that is certain is that he did not ascend to any of the aforementioned positions by his own volition or decision but by the Will of God and the consent of his people.

“Thus far, we are satisfied with his stewardship since he emerged on our political horizon as a leader. He has represented us effectively and has attracted numerous democracy dividends to our people.

“We, therefore, charge him to raise the bar on his performance in the 9th Senate, which will soon be inaugurated and keep the flag of his illustrious performance aloft. Presently, let us concentrate on the task ahead essentially because we know that emerging events will define our preferences in 2023.”