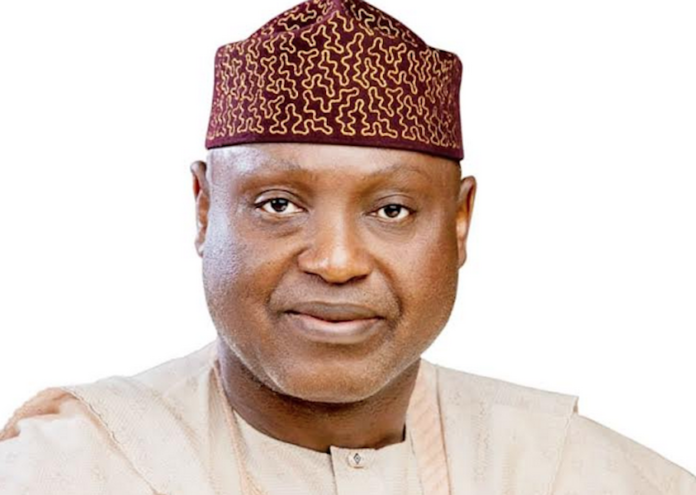 Biodun Oyebanji, a former Commissioner and immediate past Secretary to the State government has thrown his hat into the Ekiti governorship ring on the platform of the All Progressives Congress. In this interview with newsmen where Victor Ogunje was present, Oyebanji insisted that he deserves Governor Kayode Fayemi’s backing while also debunking the insinuation that he was dragged into the race by powerful forces and not vying on his own volition. Excerpts:

Some have described your as a home boy. In what context are you really a home boy?

This is another issue that can be interpreted based on the perception of the speaker. Some have described me as a homeboy because I had almost all my early education, in fact, to the first degree level in Ekiti State. I have put in at least 15 years of my working career into Ekiti development, first as University lecturer and later in government. I am also married an Ado Ekiti Princess, who is a Senior Lecturer at the University of Ibadan. So, you can call me a homeboy with the right education, exposure and network of friends across different strata.

What actually spurred your decision to vie for governorship of a complex state like Ekiti?

If I may use your language, I threw my hat into the ring because I saw an opportunity to impact my people positively and contribute my quota towards the development of Ekiti and our people. With the experience garnered over the years, in academia, the private sector and in public service. I have been involved in the government of Ekiti State holding different positions for 11 out of the 25 years of the state’s existence, and I have not been found wanting in terms of competence, character and delivery. I believe I have sufficient understanding of the issues that are dear to the hearts of our people in Ekiti- both the young and old, male and female. I have a clear understanding of the vision of the founding fathers of the state, having worked closely with them during the agitation for the creation of the state.

Is it true that you are Governor Fayemi’s anointed candidate for the governorship seat?

I don’t understand what you mean by being anointed but if it means the same thing as endorsement or support I think I deserve it if I get it. I say this because having served under Fayemi for two terms without blemish and with a record of performance to show for it, if I show interest in the governorship race and he chooses to support me, I think I have earned it. In fact, people should be very concerned if I don’t get his support, or he cannot vouch for me, having worked closely with him for over seven years in different capacities and having known him for over 20 years. However, let me quickly add that this is not my exclusive right because many people also served under Governor Fayemi and they can equally enjoy the same benefit. In fact, almost all the people contesting now must have approached him for endorsement or to get his support in one way or the other. Beyond the gubernatorial race, at least three of the aspirants have been supported by Governor Fayemi to be elected to the National Assembly at various times. So, to answer your question, his support is highly coveted and I would be honoured to get it.

Is it true that you were forced to join the race and not on your own volition?

That is an interesting thought, but I understand because that is the perception some people have of politicians. I have also heard from some people, including journalists that the speculation about me contesting this election has been on for over a year. The truth of the matter is that those who are close to me can confirm that I’m not the type that could be forced to contest if I don’t have the wherewithal to govern. The question I think people should ask is why it took me this long to aspire for elective office. My style is different, I don’t venture into any business if I am not grounded. Today, I can beat my chest and tell you that I’m one of the most qualified with the required capacity, exposure and experience to strengthen the developmental strides in Ekiti and continue from where the present leadership will stop on October 16th.

At an early age I was involved in the drafting of the Master Plan for Ekiti State. That was during the build up to the creation of the state and I think this will help very well in building on what successive administrations have done.

Now, coming to the other part of your question that some people want to use me to remain in government or cover their tracks. That is quite laughable, but we are dealing with serious issues of governance so I will not laugh. One, let me tell you something, the Governor Fayemi I know is not someone who is hungry for power and so the idea of him governing by proxy doesn’t add up at all. It will interest you that after the controversial 2014 election, some individuals were desperate to get the mandate back by any means possible but he insisted on the rule of law. Then you spoke about covering tracks? Which tracks? Perhaps track record of performance and delivery of quality service to Ekiti people. Governor Fayemi is not a frivolous person; he’s transparent, respects the rule of law and he’s ever committed to lift Ekiti to its desired heights. He has run one of the most transparent administrations in this state, winning the Open Government Partnership awards in 2020. What “tracks” does he need to cover? Such claims are from those who may feel they are losing out because of the ground swell of support my candidacy is garnering daily. There is no substance in it at all.

Do you think Ekiti people will be willing to elect the candidate of the APC come June this year?

Ekiti people are not only willing but are earnestly waiting for the day because the APC has done well in the state. Forget the distractions here and there through propaganda; the party has brought about stability in business, politics and other areas. I’m sure we will still get to discuss in more details what the party has been able to achieve under Governor Fayemi but one other thing I want to add is that there is peace in Ekiti and that is essential. There is progress and there is prosperity under the Fayemi – led APC government. There is no victimization of members of opposition parties and there is good atmosphere for people to go about their businesses. These are in addition to the huge investments in education, health care delivery and infrastructure development. For this, the people have good reasons to support and vote for APC come June 18th 2022.

Narrowing it down to Governor Fayemi, in your view, has the governor performed so well to justify Ekiti people voting the candidate of his party again this time?

Sincerely this particular question excites me because it gives me the opportunity to shed more light on the details of Governor Fayemi’s achievements. It is now over three years since Dr. John Kayode Fayemi, was sworn in for the second term of office after an interregnum of four years. When he came on board on October 16, 2018, the state was in a state of total despair and despondency. So, when JKF assumed office on October 16, 2018, his job was cut out for him. He made a promise to ensure prompt payment of salaries and pensions to the workers.

He abolished fees and taxes paid in primary and secondary schools and introduced free, qualitative and compulsory education from primary one to senior secondary school 3. He also put in place some legal and policy frameworks that have aided growth and development in the State as well as protect the vulnerable in the society. He also commenced massive infrastructure development of the State to bridge the infrastructure gap. Many of the projects he embarked upon in the areas of road construction, establishment of new schools and comprehensive renovation of all primary and secondary schools in the state have been completed. His interest in human capital development has led to the upgrade of the state own College of Education in Ikere into the University of education, Science and Technology. This is in addition to the establishment of a state polytechnic and rehabilitation of technical schools to aid vocational education. He has never ceased to fulfil this promise in spite of the combined effects of COVID-19 and the inevitable global recession that followed, he has evolved different coping mechanisms, including slashing the salaries of political appointees, to ensure workers were never owed their salaries.

The government has also recruited more civil servants and teachers to fill existing vacancies while promotion exercises that had been embargoed before his return has become a routine exercise when due. The same applies to the provision of car and housing loans, which workers now access with minimal effort. There is, no doubt, that the JKF administration has continued to faithfully implement its policies, programmes, and projects aimed at achieving the five pillars of the administration’s development agenda. For example, governance, which is the first pillar and the main frame for governmental functionality has taken a positive direction since 2018.

I belong to both and I am proud of that. I have been a lecturer, I have been a player in the banking sector, I have served the state government for 11 years and I have served on the board of a Federal Government agency as Chairman, Governing Board, Citizenship and Leadership Training Centre, Federal Ministry of Youth and Sports Development (June 2009 – Dec. 2010). Besides, I read a lot and I have a passion for books on development, the global economy, African socio-economic movements and books that deal with strategies for growth.

You are one of the few Ekiti politicians who are close to both former Governor Niyi Adebayo and Governor Kayode Fayemi. Don’t you envisage a kind of dual loyalty moving forward?

I’m close to many Ekiti leaders, including former Governor Adebayo and Governor Fayemi and I’m loyal to all my leaders and elders of our party, including my ward chairman in Ikogosi Ekiti. Perhaps you don’t really know these two gentlemen you mentioned. They are not frivolous and they don’t like eye service or sycophancy. If they give you a task, they want result and not just result but good one for that matter. Ask other people who have worked with them, they will tell you Fayemi and Adebayo are not your usual politicians. They are respectable, focused and innovative leaders.