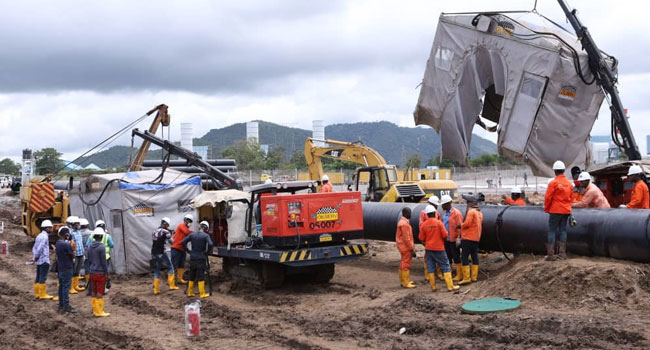 Stakeholders in the Nigerian economy have asked the Federal Government to ensure early delivery of Ajaokuta-Kaduna-Kano (AKK), gas pipeline project for its economic importance.

They made the call at a Webinar on Economic and Investment opportunities of the AKK gas pipeline project, organised by Valuechain Magazine.

The stakeholders were mainly drawn from the petroleum industry, academia, organised private sector and regulatory agencies.

They urged the government to expedite the realisation of the full AKK project scope in order to provide the critical infrastructure for industrialisation.

They agreed that the project was a potent strategy for rapid industrial development and economic diversification agenda.

The News Agency of Nigeria (NAN) reports that the 2.8 billion dollars gas pipeline project is a 40-inch x 614km pipeline that would originate from Ajaokuta, in Kogi and traverse Abuja (FCT), Niger, Kaduna and terminate in Kano.

The project, projected to be completed in 24 months, is expected to inject 2.2 billion standard cubic feet of gas per day to the domestic market.

The Rector of the Kaduna Polytechnic, Prof. Idris Bugaje, said “AKK should be completed in 18 months in order to pave way for activation of the second phase of the Trans-Nigeria gas pipeline.

“The pipeline (Trans Nigeria) would run from Eastern Niger Delta through South-East and Middle Belt to North-East.”

He added that speedy delivery of the project would compensate for its late conceptualisation.

He said that the AKK pipeline was coming 25 years late after numerous textile, manufacturing, and agricultural enterprises in the Northern parts of the country collapsed under costly, unstable and inefficient industrial fuel.

He also traced the collapse and relocation of industries from Northern Nigeria to Lagos to the rising rate of banditry and insurgency in the region.

Baguje also added that the social crisis in the Northern part of the country was as result of worsening business environment and consequent surge in the number of unemployed youth.

He noted that withering of industries, Boko Haram insurgency and growing banditry could be efficiently addressed by restoring industrial vibrancy in the region.

He also noted that the military campaigns against insurgency had remained costly and ineffective because of the failure to adopt economic measures in the prevailing counter-insurgency efforts.

He, however, warned against regulations that would limit power producers to the national power transmission grid currently managed by the Transmission Company of Nigeria (TCN), which, according to him, has proved inefficient and commercially unviable.

In his remarks, Mr Seyi Omotowa, the Managing Director of the Nigerian Gas Company (NGC), a unit of the Nigerian National Petroleum Corporation (NNPC), gave the assurance that the project would be realised in good time.

He added that a presidential inter-agency project management team was working with other stakeholders to overcome all failure factors.

He said that the AKK pipeline was an NNPC project while the project loan was hedged against the corporation’s revenue, with government providing the required sovereign guarantee.

He said the funding model, quality and pedigree of contractors, structures for transparence and accountability, as well as improved security would enable the AKK project management team to overcome foreseeable challenges and deliver the project promptly.

Omotowa noted that the economic values of the pipeline was huge adding that it was part of the national gas infrastructure blueprint designed to deepen the domestic, regional and continental market for Nigerian gas.

Also, Mr Umar Gwandu, the Technical Adviser to the Minister of State for Petroleum Resources on Regulation, said that challenges of cost and security which could encumber early delivery of the project would be addressed by the commercial nature of the pipeline operations upon completion.

He noted that the target was to ensure that domestic utilisation of gas could ride on the overall infrastructure blueprint that involved the Escravos-Lagos Pipeline System (ELPS), West African Gas Pipeline (WAGP), the AKK pipeline and eventual Trans-Saharan Gas Pipeline.

He reiterated the role AKK pipeline could play in rehabilitating moribund industries in Northern Nigeria.(NAN)