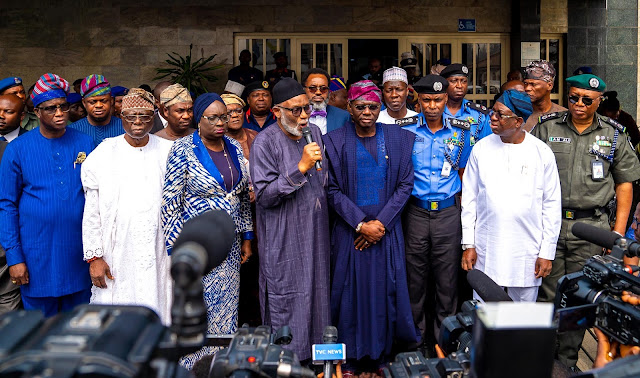 The South-West regional security operation, code-named Operation Amotekun, has been adopted by governors of all the states in the South-West. It has also received the endorsement of the Inspector-General of Police, Muhammed Adamu.

The South-West Governors’ Forum told Adamu in Lagos on Thursday that the development would facilitate efforts at securing local communities.

The forum spoke through its Chairman and Governor of Ondo State, Rotimi Akeredolu, SAN, at the South-West Security Meeting on Community Policing convened at the instance of the IGP.

The meeting held on Thursday at the Banquet Hall of the Lagos State Government in Alausa.

At the end of the meeting, the IG and the representatives of each state okayed the Framework of South-West Regional Security Network (otherwise known as Operation Amotekun), but the initiative will not be run as a regional security operation as initially suggested, it will be state-led effort, the IG said.

The meeting also ratified the community policing model proposed by the IG and the initiative would be complementing Operation Amotekun and conventional police operations in all local communities.

The host and Governor of Lagos State, Mr Babajide Sanwo-Olu, said the gathering was part of extensive meetings with the police leadership on adopting new strategies and initiatives towards securing lives and property of people in the South-West.

Speaking on the outcome of the meeting, Akeredolu said, “The governors of South-West and the IGP have held a very fruitful discussion and it is clear now to all of us that community policing, which the Nigeria Police is anchoring, is one that will benefit all of us. We have chosen that we will embrace community policing in its entirety.”

Adamu substantiated Akeredolu’s claim, saying, “This is the second meeting we have held with the governors of South-West region concerning the creation of Operation Amotekun. The just concluded meeting was to discuss and fine-tune Amotekun. Our conclusion is what the chairman of South-West Governors’ Forum has explained.

Adamu said the police would be part of the recruitment, training and deployment of personnel to be assigned for Amotekun operations, adding that the initiative would complement community policing model.

Osun State Government has approved the Osun Security Network Bill and sent it to the House of Assembly for approval.

This was disclosed after an Executive Council Meeting in Osogbo on Thursday.

A statement signed by the state Commissioner for Information and Civic Orientation, Funke Egbemode, read, “The State of Osun at an extraordinary Executive Council Meeting today considered the Osun Security Network Bill, approved and sent it to the state House of Assembly. The bill titled, ‘A bill for a law to establish the State of Osun Security Network Agency and Amotekun Corps to assist in maintaining law and order in the state and for connected purposes’ was the sole business of the day at today’s council meeting.

Amotekun Corps bill, on Thursday, passed a second reading at the Oyo State House of Assembly.

Speaking with journalists after plenary on Thursday, the Speaker, Oyo State House of Assembly, Adebo Ogundoyin, said his colleagues were excited to receive the bill.

“We have passed it to House Committee on Security for scrutiny. After that, we will hold public hearing to ensure our people’s opinions are accommodated.

“Personally, I have seen lot of comments and positions from our people in the media about the proposed security outfit and its bill. Amotekun has generated lot of attention and the expectations are high. Thus, we have to handle the processes with the importance it deserves,” Ogundoyin said,

Ogun State House of Assembly, on Thursday, acknowledged the receipt of correspondence from the state Governor, Dapo Abiodun, on the proposed bill on the State Security Network Agency and Amotekun Corps.

The Speaker of the assembly, Olakunle Oluomo, while reading the letter from the governor, dated 12th February, 2020, said the content had been approved at the second meeting of the State Executive Council held on Friday, with a view to maintaining law and order in the state.

The letter read, “I forward herewith a bill for a law to establish the Ogun State Security Network Agency and Amotekun Corps to assist in maintaining law and order in the state and for connected purposes as approved at the second meeting of the Executive Council of Ogun State held on 11th February, 2020, for the kind consideration and passage of the House of Assembly”.

The speaker pledged that the Assembly would ensure that the bill was given a speedy passage into law.