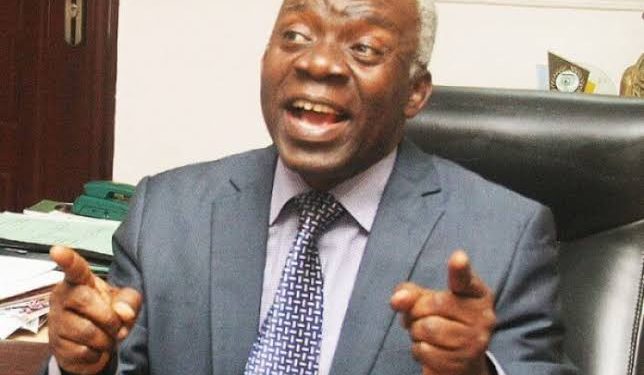 Human rights lawyer Femi Falana (SAN) has accused “corrupt politicians and some senior lawyers of hijacking the criminal justice system and working together to frustrate the effective prosecution of corruption cases pending in several courts”.

He made the accusation in a paper he presented yesterday at this year’s Law Week of the Epe branch of the Nigerian Bar Association (NBA) at Epe, Lagos State

In the paper, titled: The Danger of Unequal Criminal Justice System in Nigeria, the eminent lawyer urged “progressive lawyers to team up with other patriotic forces to ensure that all defendants are treated equally under the criminal justice system”.

He said: “Apart from two former governors, namely Messrs Joshua Dariye and Jolly Nyame, the list of convicted persons is made of lowly placed individuals in the society. Owing to abuse of court process, rich defendants have continued to frustrate their prosecution with the connivance of some senior lawyers.

“By virtue of Section 17 (2) (a) of the Constitution of Nigeria 1999 (as amended), every citizen shall have equality of rights, obligations and opportunities before the law. But in practice, the rich and poor defendants are not treated equally by Nigerian courts.

“Apart from the fact that rich litigants have the means to hire the services of the best lawyers in any area of the law, the courts are (also) manned by judges who are not neutral in the class struggle being waged daily by the Nigerian people.

“According to reports, the Economic and Crimes Commission (EFCC) secured 312 convictions and recovered asGood governance alien to PDP, says BMOsets estimated at N11.5 billion in 2018. In the first quarter of this year, the EFCC recorded 192 convictions and recovered assets of N117 billion. It is indisputable that the rate of convictions has increased due to the Administration of Criminal Justice Act, which has provided for the acceleration of criminal cases in all Federal courts.

“Realising that majority of economically marginalised citizens have no access to legal representation, the Federal Government has set up the Legal Aid Council to provide legal services to indigent citizens. But due to the fact that it is poorly funded, each state government has established the Office of Public Defender to ensure that underprivileged citizens are provided with legal services.”

The eminent lawyer observed some loopholes in the nation’s legal process and efforts by anti-graft agencies to prosecute some categories of suspected criminals.

He said: “Notwithstanding that the EFCC has been accused by the bourgeois media of engaging in Gestapo tactics with respect to the treatment of suspects, it cannot be denied that the rights of influential criminal suspects are well respected by the commission.

“The big men and women implicated in allegations of serious economic crimes being investigated by the commission usually receive polite letters of invitation, telephone calls or text messages advising them to contact named investigators whose telephone numbers are supplied.

“Through such arrangement, the suspects are allowed to report themselves at their own convenience. Other suspects may decide to vamoose or brief lawyers to embark on legal measures to shield them from investigation and prosecution.

“If and whenever influential criminal suspects report themselves, they are treated with utmost courtesy by the investigators. Since they are presumed innocent until they are proved guilty by the state, they are never paraded before the media, regardless of the gravity of the offence committed by them.

“Unlike what obtains in Western countries: it is infra dignitate to subject big men and women to the restraint of handcuff in Nigeria. Hence, hell was let loose when a chieftain of the Peoples Democratic Party (PDP) on trial for money laundering was recently handcuffed by the Kuje prison authorities.

“A few years ago, the Olusegun Obasanjo administration apologised in writing to a former police chief who was handcuffed by the EFCC while he was on trial for money laundering and corrupt practices to the tune of N17 billion.

“If a VIP suspect cannot be located by the commission, his relatives are never arrested. He is declared wanted and may be reported to the Interpol. However, in Benedict Peters v EFCC, a High Court in the Federal Capital Territory (FCT) has ruled that the commission lacks the power to declare any suspect wanted without first obtaining a court order for that purpose.

“It is also important to know that if the commission is going to detain a big man or woman for more than 48 hours, it has to obtain a remand order from a Magistrates’ Court, in line with the provisions of Section 293 of the Administration of Criminal Justice Act, 2015. Suspects always apply to be kept in the commission’s cells since they are much more comfortable than police and prison cells!

“Owing to unequal justice that has become the hallmark of the nation’s criminal justice system, the prisons and police cells are filled with the victims of our unjust socio-economic system. On account of prison congestion, due to inadequate funding, majority of the inmates, who are awaiting trial, are locked up with convicted prisoners.

“Upon their release from dehumanising prison conditions, the awaiting trial inmates and convicts team up to join criminal gangs constituted by frustrated young men and women in the larger society.

“The criminal gangs drawn from the ghettoes in the cities are fighting back on the streets in broad daylight and in the homes of the rich and not so rich people in the dead of the night. Instead of teaming up with the victims of frustration to terminate institutionalised injustice in the land, Nigerian lawyers are using the law to defend the status quo under the rule of law.

“The NBA, which does not hesitate to mobilise hundreds of lawyers to defend indicted senior lawyers and judges, has not deemed it fit to extend free legal services to indigent defendants facing trial for poverty-related offences in the courts.

“It is common knowledge that Nigeria operates a double criminal justice system – one for the rich and one for the poor. Majority of indigent defendants are tried in the magistrate and area courts have no access to lawyers. Because of the gravity of certain offences, indigent defendants are represented by young and inexperienced lawyers assigned to them by the state…”