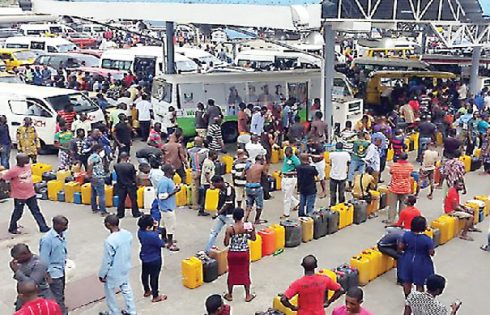 The frequent appearance of queues of desperate motorists at filling stations in search of Premium Motor Spirit, otherwise known as petrol, could affect the Christmas and New Year festivities, oil marketers stated on Friday.

It was also gathered that oil marketers were now free to sell petrol at any rate as the Federal Government was no more restraining them from dispensing the commodity at a regulated price.

Fuel queues have continued to appear and disappear since January this year despite the hike in the cost of the commodity by oil marketers without any approval from the Federal Government or sanctions imposed on them.

Rather than speak on the matter, the Federal Government, through its Nigeria Midstream and Downstream Petroleum Regulatory Authority, chose to remain mute.

Officials of the agency neither answered calls, nor replied to text messages sent to their mobile phones on issues of the scarcity of petrol nationwide.

Similarly, the sole importer of PMS into the country, the Nigerian National Petroleum Company Limited, has refused to make any comment on the development.

The NMDPRA, in its report on product sufficiency on Thursday, however, claimed that there was 33.17-day sufficiency of PMS in the country as of November 24, 2022. It also stated that about 2.1 billion litres of petrol was in stock despite the widespread queues nationwide.