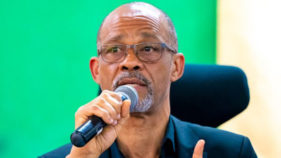 The Lagos State Government has revealed plans to prevent the third wave of the COVID-19 pandemic, saying it will monitor positive cases to detect new variants.

The state Commissioner for Health, Prof. Akin Abayomi, in a statement on Monday said there had been a reduction in the cases being recorded in the state.

Abayomi said what could cause the third wave in Lagos was likely to be the importation of new COVID-19 strains from inbound travellers.

“Following the flattening of the second wave; we are seeing a significant dip in the number of positive cases and deaths; going by the low occupancy rate in our isolation centers, reduction in the demand for oxygen and the positivity rate that has decreased from around an all-time high 35 per cent in December 2020 to 1.5 per cent as of April 2021.

“It is important to reiterate at this point that passengers are still required to be have receipts of negative COVID-19 PCR test at least 72 hours before departure from and landing in Lagos State, book and pay for their day seven test either through the national portal or the Lagos State portal. All passengers must have paid for their tests before arrival in Lagos State. Failure to do this will result in delays at the airport,” he said.

“On the authority of the governor, who is the Incident Commander, immediate measures to fully enforce the protocol just announced by the Federal Government will be adopted for every inbound person, which include banning entry to non-Nigerian passengers who have been in Brazil, India or Turkey in the last fortnight due to concerns over the spread of coronavirus in those three nations.

“Nigerians and permanent residents of Nigeria who have been in those countries in the last 14 days will have to undergo mandatory quarantine for a week in a government-approved facility on arrival and all passengers arriving in Nigeria will now have to show a negative COVID-19 test taken within 72 hours of travel rather than the previous 96 hours period,” Abayomi said.